Josh and I have been visiting a church for a few weeks now called Vox Veniae and this morning during the service we sang a song from my past. It’s called Faithful To Me by Jennifer Knapp, and it’s a song that drew me to the Lord in a pretty amazing way back in High School when I was first exploring what it was to live as a believer. The lyrics brought back so much emotion and spoke so much truth, and somehow always seem to reflect how some part of me is feeling during every season of life.

“All the chistles I’ve dulled carving idols of stone
That have crumbled like sand ‘neath the waves.
I’ve recklessly built all my dreams in the sand just to watch, them all wash away.

Through another day, another trial, another chance to reconcile
To one who sees past all I see.
And reaching out my weary hand I pray that you’d understand
You’re the only one who’s faithful to me.

All the pennies I’ve wasted in my wishing well
I have thrown like stones to the sea.
I have cast my lots, dropped my guard, searched aimlessly for a faith
To be faithful to me.”

What also really moved me this morning was the fact that the woman who wrote this song recently revealed that she is gay. I sat there thinking about her writing this song, feeling the weight of her secret and desperately wanting the acceptance of man. She learned as I did that what we’re all looking for is the Love of One who incapable of letting us down.

I am so grateful that God uses us in our weakness to do incredible things. The words to this song will be timeless in my life, and I applaud Jennifer’s humility and honesty.

Hope you all find truth this week.

One year ago the earth was graced with 11 little spotted puppies, born to their mama Shea in Battle Ground, Washington. It’s been so fun to get to see our little Henry boy grow into the 60 pound ball of energy that he is today. Heaven knows we were clueless about what we were getting ourselves into at the time..

The week before we took him home 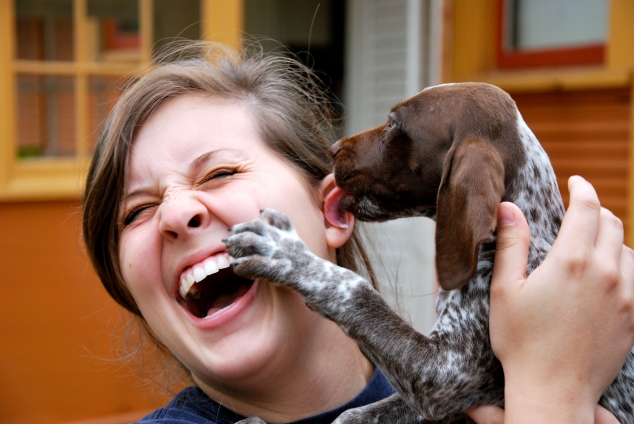 Ahhhh I can't handle the cuteness! 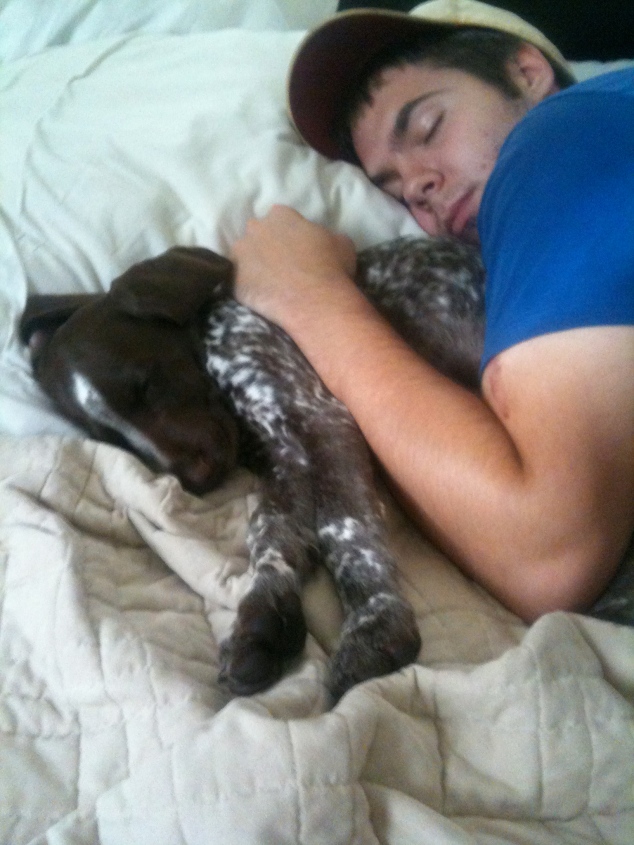 What a hard life you lead

You are the best dog in the world, Henry boy! You bring so much joy and laughter into our lives, and always make sure I get plenty of exercise during the day chasing you around. We loooooove youuuuu!

I got the pleasure of spending this past weekend hanging out with some wonderful fellow bridesmaids who I’ll be walking down the aisle with in July for my dear friend Katie’s wedding. We left from Georgia and went to Myrtle Beach (my first time there) and pretty much had a blast. I’ve never been the only married gal at a bachelorette party, and let’s just say that we all got to know each other real fast. Katie has made some fabulous friends over the years and I’m so pumped to get to hang out with them again when she gets married. Considering the quality of people that will be in attendance, the amazing cathedral we’ll be in, and the fact that there’s an open bar, I’m pretty sure it will be the 2nd best wedding I’ve ever been to 😉 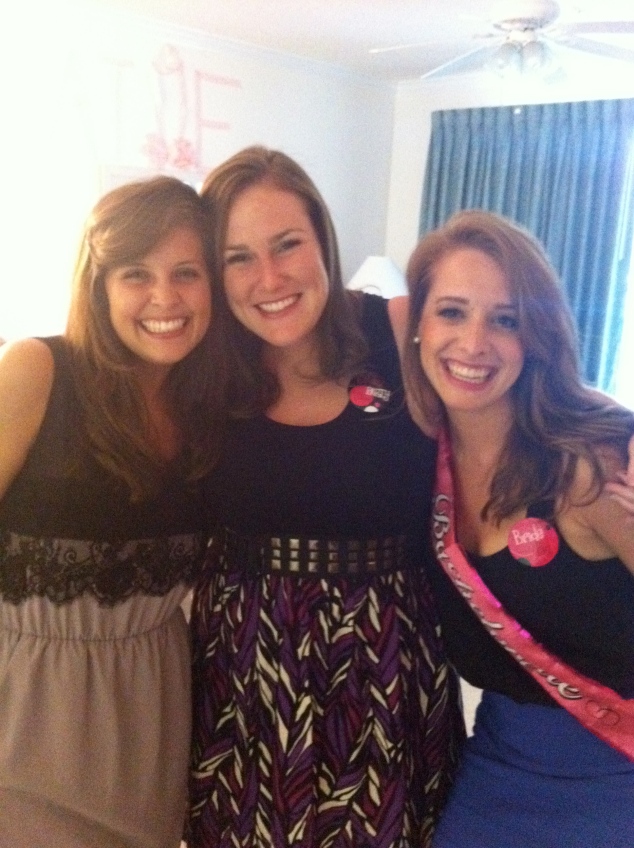 Leaving Georgia always leaves me so emotional. I didn’t feel ready to come back to Texas, as much as I missed Josh while I was gone. I remember going through this with Oregon too. I hate the part where your new city doesn’t feel like home yet, and how you just long for that feeling of belonging. I am ready to have a few good friends here to share life with. I also can’t wait for friends to visit us, because there is no better place to host people. This city rocks.

So here goes re-settling into my life here in Austin, which mostly involves taking Henry to the park every day and doing tons of errands. Still hoping and praying for God to show me what’s next for me as far as a job goes. Not too worried, though, since He’s never let me down before.

Man, oh man…Austin is such a cool city. If you haven’t been here, FLY HERE. Like book your reservations right now and come. It’s awesome.

Considering the facts that our stuff didn’t arrive until a week and a half after the moving company told us it would, and our apartment had fleas when we moved in, and it took 2 weeks to get internet hooked up, this whole “moving” experience this time around hasn’t been the greatest. BUT today I can officially declare with a happy heart that our little 2 bedroom place at Woodmoor Apartments is finally feeling like a home.

I know I talk about my dog a lot…but to be quite honest, my life revolves around him at this point so it won’t be stopping anytime soon. (Tune out the next paragraph if you’re sick of hearing about him) Here’s one incident with him that was not very funny at the time…

Henry is loving his new life of sunshine and swimming EVERY DAY! One particular afternoon we took him to swim at a beautiful, crystal clear stream that runs through the city called Barton Springs. There is a huge park built around it and so many people hang out there and swim on hot days. Well, everything is going great and Henry is swimming around and smelling all the new humans around him splashing around. Then all of a sudden I hear Josh yell “HENRY!!!! NOOOOO!!!!” and I, with the rest of the hundred people around us turn to see what is happening. Well my dog decided to poop in the shallow area of this mineral springs in the middle of a crowd of people. A very embarrassing walk of shame happened afterward as I searched the premises for a bag to scoop it out of the water. While I was doing this, Henry decided to poop AGAIN. At this point we were just speechless and all the moms were ushering their families out of the contaminated water. It was so not funny at the time, but now that I think back on it, I can finally smile a little bit and that bad feeling in my stomach from being humiliated is kindof gone.

In short, the food is amazing. Me and the sun are having a very passionate affair with one another. Josh loves his new job. Life is pretty great.

Since we finally got internet over the weekend, I guess I have no excuse but to start the job search. I could really use some prayer, considering I have absolutely no direction or idea of what I might like to do with my time in Austin. So yea…I’ll let you know how that goes for me.

Much love from a much tanner version of myself! 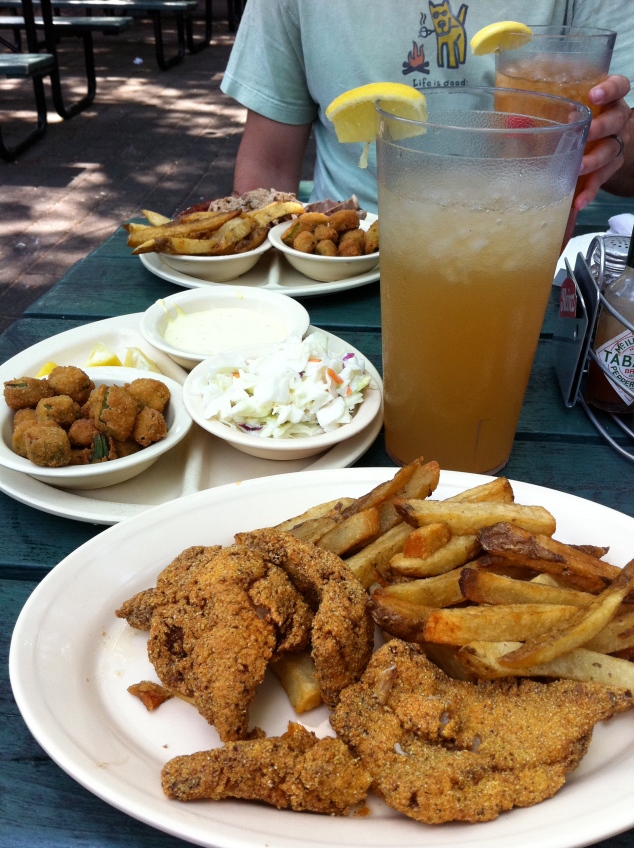 Some of the unbelievable food that Austin has to offer

The source of the incident with Henry and the poo. 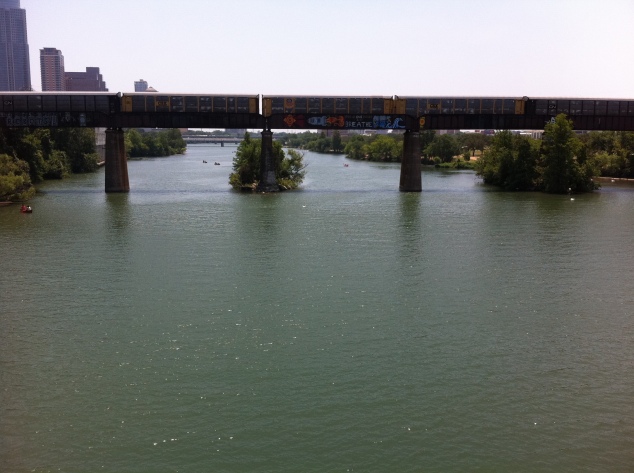 The river that Henry has spent many blissful hours chasing frisbees 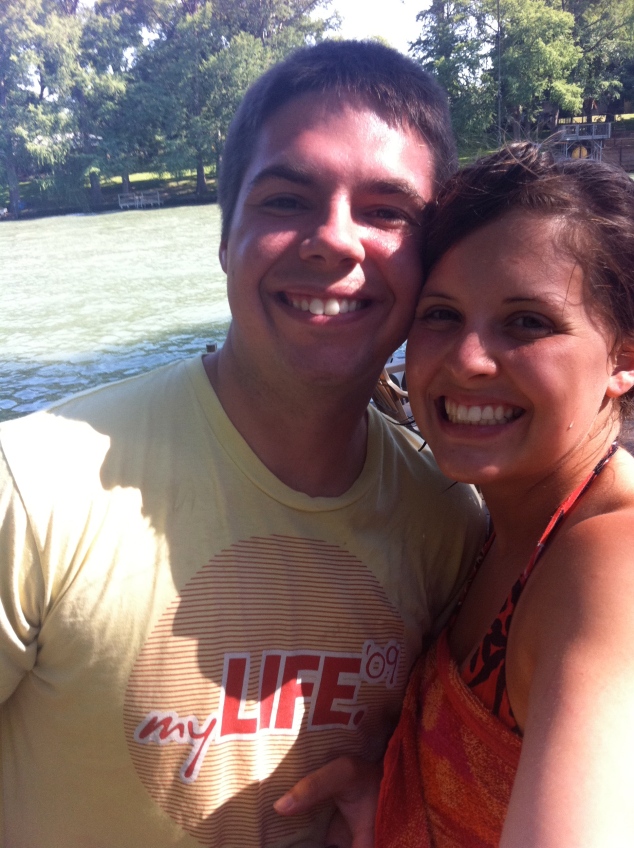 Me and Josh at a friend's lakehouse for Memorial Day He found his heaven on earth.